“On an atomic level, nearly everything is affected by magnetics.”

The mysterious power of magnetism has fascinated people wherever and whenever they havecome into contact with it. Magnetism was discovered thousands of years ago in China; however, other areas of the world have also experienced its effects. Legend has it that in ancient Greece, a shepherd named Magnes discovered a magnetic rock. While leading his sheep across the mountain, he struck the metal tip of his crooked rod into the rock and found that an unseen force (a magnetic field) held the iron rod in place. It was only with great effort that he was able to free the rod from the rock. No one had a ready explanation, so it was assumed that the rock, which they called Magnet, had a soul of its own.

Thank You For Caring and Thank You For Your Support. By using this product, you are making the world a better, healthier and cleaner place, and you may be positively impacting the health of your family for years to come. Over many years of use, you will personally prevent flushing thousands of pounds of synthetic chemicals into our irreplaceable fresh water supply. That is a significant impact that you can very easily make on your own. Every little bit helps, and we will all be working together towards a future where our children and grandchildren will inherit a cleaner and healthier planet. Thank you again. We would not be able to continue to go out and fight to create a better world against a system that doesn’t want us to succeed without all of the support of our wonderful customers. We will change the world together.

The answer to this invisible magnetic force remained a mystery until Gilbert (1544-1603), an English physician, came close to explaining the secret. His book, De Magnett, contained much information about magnetism. He discovered that you could break a magnet into smaller and smaller pieces, and each piece would still exhibit the same magnetic properties. Now we know that these properties result from the electrons in each atom spinning in a circular path around its nucleus. When an external force is applied to ferrous metal (iron), the atoms and their electrons orient in one direction, and the metal is said to have a north pole and south pole similar to the poles of the Earth.

Hendrick Lorentz was one of the pioneers in research of magnetic force and its effect on particles. He, and pupil Pieter Zeeman jointly won the Nobel Prize for Physics in 1902. The Zeeman Effect (the work of both scientists) explains how a magnetic field can alter the normal state of hydrogen, one of the two main components in water (Oxygen being the other). Specifically, external applied magnetic force splits energy levels in hydrogen atoms. The hydrogen atom is one of the most important dynamical systems in all of physics, for several reasons:

Research performed by 1976 Nobel Prize nominee for Medical Physics (Rawls) has demonstrated that there is a change in the hydrogen ion electronic activity in magnetically treated water. The hydrogen ions (charged particles) are altered to a noticeably higher state of activity. Further research into this phenomena indicated that magnetically treated water can reduce the amount of dissolved nitrogen in water. Reduction in nitrogen can decrease the growth of algae in rivers, streams and lakes. This is of significant benefit, as algae can cause a variety of health and environmental problems such as red tide and the sickness and death of massive amounts of marine life.  His research clearly showed that water can be altered by applied magnetic force. 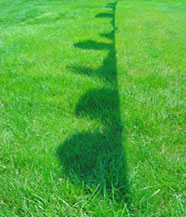 The theory behind the Life Miracle Laundry System is that the magnetic eddy currents created by the Laundry System assist in lowering the surface tension of the wash water to increase its natural solvency and more able to permeate the garments to release soil and odors. The concept is that hydrogen, at an atomic level, is altered by magnetic force. Therefore, as a main element of water, water is similarly altered by magnetic force.

When a pole (or “terminal”) of a magnet is placed in close proximity (or submerged) in water, the atoms in the immediate area become more highly charged by the electric field from the magnet. It is believed that this increased charge causes the “activated” water (the universal solvent) to become an even better solvent to clean clothes.

Research into the magnetic application of water must still be considered in its infancy, but there is significant research to suggest that magnetics affect nearly everything at an atomic level and is the basis of the theory of why clothes are cleaned when using our technology in a conventional washing machine.

This information is only mentioned to describe a basis of explaining the “why” behind the system. Though most are satisfied by simply using the technology and personally experiencing its benefits in practical application, others seek further explanation as to “why” their telephone can send their voices instantaneously over a wire or “why” an airplane weighing several tons can defy gravity and transport them through the air around the world.