I was listening to the radio, and I heard a VEEERYYYY INTERESTING theory.

The speaker was saying that, during the Middle Ages, the people that were hardest hit were NOT the poor people.

It was the rich who lived in cleanliness, and used what was (at the time) the best sanitary practices.

Because the poor people lived in dirty places.

Their immune systems were used to fighting off diseases.

But the kings and queens didn’t have strong immune systems, because they weren’t exposed to the same types of bacteria, etc. that the poor people were.

Now, is this really what happened with the Bubonic Plague?

It is just a theory, and totally not testable.

But it is interesting that modern doctors are talking about something similar.

For instance, the increased use of antibiotics has made “super bugs” that are super resistant.

Even washing your hands can be a problem.

Dr. Mercola, the #1 Natural Health Doctor on the Internet, wrote that anti-bacterial soap can be a real danger.

According to Dr. Mercola, “triclosan have also been linked to a number or harmful health effects, especially in young children.”

Triclosan has been linked to allergies and hormone malfunction.

So, ditch the antibacterial soap.

And clean the all-natural way. 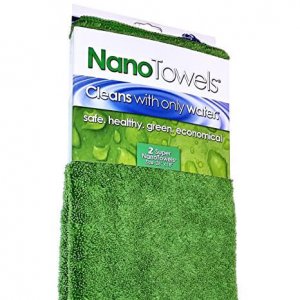 ▪ It’s easy – It cleans with only water, without all the muss and fuss of other cleaners.

▪ It saves you money – No more rolls of paper towels, or expensive cleaners.

▪ It’s safe – You can clean without toxic chemicals, that can damage the health of you, your family, your pets, and the environment.

And just to make sure that you are totally satisfied, I’m going to offer a 100% money back guarantee.

If you aren’t personally 100% satisfied that the Nano Towel® is the best, safest, most cost effective towel that you have ever used, . . .

So, what do you have to lose?

▪ Brought to you by

Sometimes Life Poops On Your Car.
How To Keep Your Kids From Getting Allergies